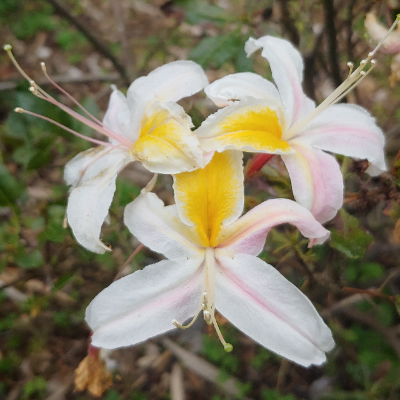 It's so incredible to see a generation that wants to be old someday.

No matter how badly you fuck up, just remember that you weren't the guy who started saying each of us is solely responsible for our survival.

The revolution is compassionate.

Look what my mom made me

Heads up, folks, I'll be migrating out of SBC and over to weirder dot earth soonish. There's an account with this same handle over there now if you want to follow it preemptively, but you can also wait for the move.

My favorite people are the ones who engage and appreciate both my fun, energetic playfulness and my sensitive, intelligent wisdom.

Not to mention when those blend together sometimes for The Good Stuff.

My hairtie broke on the way to work so I'm a bottom today.

Portland peeps miss out on my #MascMonday

SBC was fun when I got here, and I'm sure that something good exists underneath what it is now, but I suspect that any effort I could make to help affect change to it would hit a ceiling at some point, in that I'm not at all familiar with how the co-op works, the extent of the problems, and the white lens from which I would be acting from. It just wouldn't be enough for me to give as much to the effort as I could, and I think that's true of everyone here unless serious changes are made. I could not begin to offer suggestions on those changes that haven't already been made and shoved away, though.

Heads up, folks, I'll be migrating out of SBC and over to weirder dot earth soonish. There's an account with this same handle over there now if you want to follow it preemptively, but you can also wait for the move.

yeah so blinded by the 25p price tag I purchased this tweed blazer, the most un-me thing possible, and now I'm pissed off I won't wear it bc it fits me nicely lmao

Night Crew is real quite tonight, it seems.

I am still working, I will work my whole life, to be actively anti-racist, to identify and attack within myself and within my world the mechanisms by which black people are demeaned, dehumanized, systematically stripped of power. I am convinced that that struggle, the struggle against anti-blackness, will, in concert with struggles like decolonization, and the Jewish struggle for Messiah, lead us into the world that is to come, a world vaguely promised by all traditions, a better world of peace

What’s the name of Frog and Toad’s podcast.

The basic story here is that every time scientists have thought "we've finally done it, we've discovered the true mathematical nature of reality", they eventually prove themselves wrong, and proving themselves wrong has led to ever more accurate and beautiful descriptions. Often these new descriptions and discoveries are met with hostility with people who have decided "this is it, this is the final basis of reality", I don't need to give you examples of that, there are many in even the supposedly purely rational world of mathematics.

I think such occurrences are examples of where science as a discipline clashes with science as an ideology. When people think "this is it", that's when science becomes ideology. It's no surprise that this ideology merges with others, to form this sort of Simulationism and Singularism(?) we see today out of tech empires, or the absurdities of Lysenkoism in the USSR. Simplistic microeconomics used to "justify" capitalism.

Just say “yes, and” to drugs

It’s only sarcasm if it comes from a valley in the Sar region of France.

Everything else is snarkeling whine.

Me, about the person I plan on proposing to: Look at her, goin about her cuteass business, comPLETLEly unwifed,

gender of the day: making gifs of every queer thing wade garrett does and putting it in tumblr's road house tag to make straight men uncomfortable

Y'all should aspire to be a good coworker and a terrible employee.