⭐ Libertarianism advocates for the use of non-state and anti-authoritarian means as a way of bringing about a socialist or communist society.

Anarchism advocates for the identification and abolition of hierarchies, and their replacement with horizontally organized structures from the bottom-up 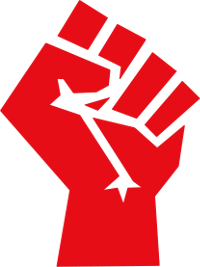 Libertarian Socialism advocates for the workers themselves to take direct control over the means of production, without using a state, political party or by appealing to authority

🍞 Libertarian Communism advocates for direct implementation of a stateless, classless, moneyless society, where resources are distributed based on individual need, without use of a state or authortarian means

So why do libertarian socialists and libertarian communists object to the use of the state?

It's not just a moral but also a tactical necessity, as the historical use of state apparatus demonstrates how it can actively scupper true workers' liberation.

In 1917, workers' councils in the former Russian Empire began to take control of their workplaces. They abolished the monarchy and instituted a form of truly working socialism. In October of that year, the capitalist government of Russia was overthrown and new socialist elections were called. But the Bolsheviks, who saw themselves as the revolution's vanguard that was destined to take state power, actually didn't even come close to winning the election.

The Socialist Revolutionaries of Russia and Ukraine took home over 50% of the vote, while the Bolsheviks barely managed half of that. Nevertheless, it was the Bolsheviks that years later ended up seizing power and instituting a one-party dictatorship.

This is what marks the beginning of what libertarians call the 'Third Russian Revolution', which acted to preserve socialism from the tyranny of party politics.

In April 1918, the first repression of libertarian socialists occured, when the Bolshevik's secret police force the Cheka opened fire on anarchists in Moscow.

Left-wing Socialist Revolutionaries (Left-SRs) were initially invited to join the Bolshevik government, given they favoured the immediate redistribution of land as opposed to the manstream SR party's more gradualist approach. However, the Left-SRs ended up leaving the government in protest of the Treaty of Brest-Litovsk, when the Bolsheviks handed over Ukraine and the Baltics to the imperialist central powers.

Anarchists rose up in Ukraine to counter the invasion of German and Austro-Hungarian imperialists, and the collaborationist Ukrainian state. The land they liberated from these empires formed the anarcho-communist Free Territory.

When the next congress of workers councils was called, Left-SRs formed the opposition to the Bolshevik regime. They objected to Brest-Litovsk, as well as the Bolsheviks' suppression of all other political parties and their reintroduction of the death penalty.

In response, armed Left-SR members stormed pieces of key infrastructure, declaring a rebellion against capitalist imperialism and its Bolshevik collaborators.

Bolsheviks gathered riflemen from Latvia (a country they just sold to the German empire) and swiftly put down the uprising, putting an end to the last socialist political party in opposition to the Bolsheviks.

Opposition now no longer came from other political parties, but from anarchists, libertarian socialists and most importantly the workers themselves.

Workers were horrified as their councils, their *SOVIETS* were broken up and co-opted into the Bolshevik state's bureaucracy. They formed a workers opposition, attempting to hold onto direct control of the means of production rather than let it be put into the hands of the state.

Anarchists in Ukraine now also opposed the Bolsheviks, demanding an end to the repression of Left-SRs, the returning the means of production to the hands of the workers, and an end to the requisitioning of grain for money (instead asking for goods to be traded directly, without money)

In Tambov, peasant "Green Armies" rose up against the Bolshevik government's forced redistribution of land into the state's hands, and the requisitioning of grain, the harsh quotas of which which were causing many of them to starve.

Seeing the amount of people now starving in Petrograd, anarchist sailors of Kronstadt also rose up against the Bolsheviks under the slogan "All Power to the Soviets, not to parties!" and demanding an end to the state capitalism implemented by the Bolsheviks with the New Economic Policy.

Emma Goldman offered to mediate the conflict, but instead Trotsky sent in the red army to crush the would-be revolutionaries.

The Red Army held out an olive branch to the Ukrainian anarchists and then stabbed them in the back, assassinating their leaders, putting the Free Territory under siege and imprisoning any self-declared anarchists in Bolshevik territory.
The reds also used chemical weapons in their slaughter of the Green army of Tambov.

The Revolution was over, crushed by the very people that claimed to be its vanguard. Taking social control of the means of production out of workers hands, and instead recreating capitalist production in the hands of the state

This is why libertarians oppose the use of the state in the institution of socialism, as our analysis finds statism to be a profoundly capitalist ideology. As anticapitalists, we must oppose capitalism in whatever form it takes, even an omnipotent state bureaucracy.

Show thread
0
Sign in to participate in the conversation